Unlock the Mythic History of the Great Living Chola Temples 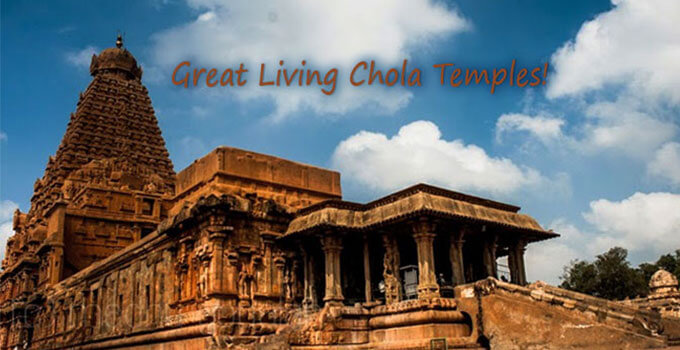 Being a true testimony of the accomplishments of the royal Chola reign, the Great Living Chola Temples are a breathtaking view to behold for anyone visiting Tamil Nadu. Rich with a myriad of architectural beauty, sculptures, paintings and astonishing bronze castings, the temples will leave everyone gasping for breath. Owing to its cultural and historical significance, UNESCO has dubbed them one of the World Heritage Sites.

Dating back to the times of the Cholas in the 11th and 12th century CE, the temples have withstood the tumultuous times during and after the rule of the kings. The Cholas were not only great rulers who reigned over Tamil Nadu, but they also were proficient builders.

Built by the great Chola king Raja Raja I, Brihadisvara temple at Thanjavur is the most striving of all the Great Living Chola Temples. It is believed that the king received divine command when asleep to build the temple. The opulence and imposing design of the temple further added to the grand style of the capital of the great Chola kingdom.

Housing the tallest vimana in the world, the temple and the walls of its gopurams are ornated with a plethora of sculptural depictions of various goddesses and gods in the Hindu mythology. The temple also has a Shiva Linga having a height of 3.7 meters.

The enormous proportions used in the temple carefully blended with the subtle designs are believed to have become inspirational in constructing several buildings that followed the suit.

The Temple of Gangaikonda Cholapuram

This temple was built by the great Chola King Raja Raja I, too, to commemorate the king’s victory over the northern kingdoms. Later, the city of Gangaikonda Cholapuram was formally raised to be the capital of the Chola kingdom by the King Rajendra Chola I. The Chola Empire chose the Gangaikonda Choleswarar Temple as the centre for development and administration.

The temple houses a four-meter-tall Shiva Lingam which is the tallest of all the three Chola temples. The enormous depiction of Navagrahas at the temple is one of the greatest attractions of the temple here, and the nine deities are arranged in a circular manner. The temple assumes the form of a chariot. The sculptures of Gnanasaraswathi and Chandeswarar are the other two incredible attractions that one can find at this temple.

The Airavatesvara Temple at Darasuram

The smallest of all the Chola temples, the Airavateswarar temple in Darasuram was constructed in the 12th century AD by the great Chola King Raja Raja II. The deity of the temple is the favourite of the Cholas, Lord Shiva, and he is honoured here as Airavateshwara.

Though small in size, this temple, too, is renowned for it’s intricate, exceptionally detailed and grand architectural style and build. The mandapam at the front of the temple is built to elicit the feel of a massive chariot being drawn by horses. The temple’s Vimana is 24 meters tall. As recognized by nitya-vinoda, the architectural design style of the temple is ‘a perpetual entertainment in mind’.