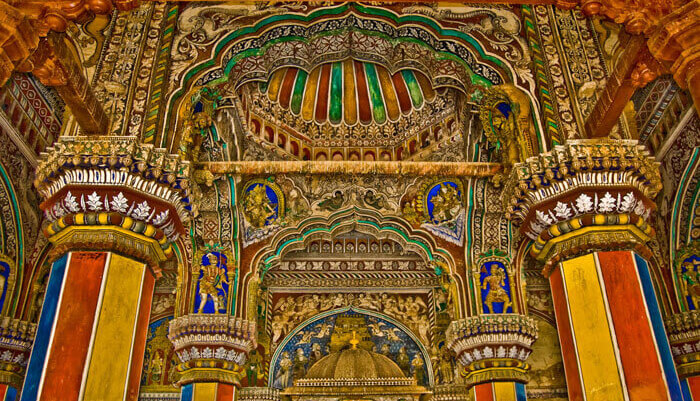 The palace complex, also called Aranmanai, was used as the official residence by the Bhonsle family that ruled Thanjavur from 1674 to 1855. The palace used to be called Sivaganga Fort and was built during 1633-1674 by Vijayaraghava Nayakkar who was the last king of the ruling Thanjai Nayak dynasty.

Important monuments of the complex that have historical significance, such as the Bell Tower, the Arsenal Tower, the Sadar Madi and the Darbar hall of the Marathas, have been protected by the State Department of Archaeology.

As much as the Big Temple Tower attracts visitors to the palace, Arsenal Tower of the palace attracts visitors, as well. It was in 1855 CE, during the rule of the Marathas that this eight-storey Arsenal Tower, having a height of 190 feet, was constructed. The major objective of building such a massive construct was to house a wide range of ammunition, weapons and armouries.

The tower also functioned as a watchtower to inform the king of any sort of attack. Among a wide variety of weapons stored in the tower, many were imported weapons from Europe. However, the British took over the palace in 1855, and consequently, all of the weapons recovered from the tower were transferred to Trichy in 1863. It is at the northern side of the Arsenal Tower, where the Belltower is located. It is believed that the Nayakkar used to worship his favourite deity from the tower’s top terrace in the direction of Srirangam. The Arsenal Tower, that has seven storeys now, originally had a number of storeys, which were perished in rain and thunder.

The visitors can see numerous portraits of Maratha rulers at the Darbar hall including that of Sarfoji. There are several arches, octagonal columns and beautifully ornated walls with the images of Hindu gods such as Vishnu, Shiva and Indra along with their consorts.

The Thanjavur palace is one of the very rear places that reflect the impeccable architectural beauty and confluence of the ‘Marathas’ and ‘Nayaks’ styles. While traversing through the corridors of the palace, it is easy to understand that both the dynasties were great patrons of art and culture, and tried to promote the same during their reigns.

For anyone who loves to understand the ways of life of kings from ancient South India, the palace is a heaven in all its historical values. Apart from appreciating the remnants of the bygone kingly rule, the astonishing architecture will keep surprising you, even after you have long left the palace behind.