Tease your taste buds with the exotic Thanjavur cuisine 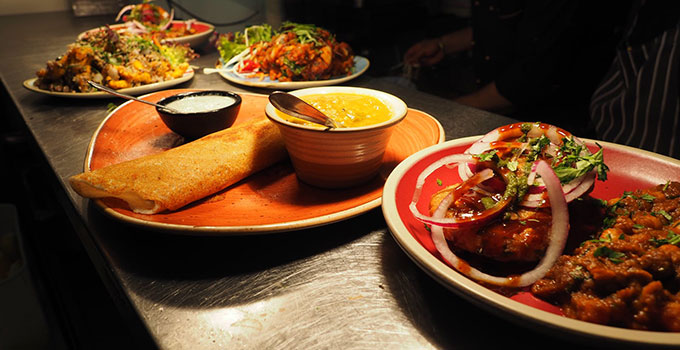 Tease Your Taste Buds With The Exotic Thanjavur Cuisine

If a traveller having food at Thanjavur doubts if Thanjavur has a sense of cultural elitism and aesthetics, it surely has come from the affluent Kaveri Delta near Thanjavur. In the grand scheme of things that get mentioned and appreciated such as music, dance, painting and art, Thanjavur cuisine gets sidelined, most of the time. However, if there is anything that deserves special mention, it is the Thanjavur cuisine.

Whatever arguments can be made, there is an undeniable influence of Maratha food over the cuisine that one can find in Tamil Nadu and in Thanjavur, especially. It is believed that the famous South Indian sambhar was cooked in the royal kitchens of the Maratha kings. As the cook could not find kokham, he added the locally available tamarind with dal and sautéed vegetables to make the ubiquitous sambar as known and savoured today. There are also culinary historians of the opinion that the habit of using coconut as dips and garnish came from the Maratha culture and somewhere in Kerala.

Thavala Adai is one of the best vegetarian dishes that one can find in Thanjavur. The chief ingredients of the item are lentils and rice. Traditionally cooked Thavala Adai offers a little crispness on the outside, while the inside of the Adai offers soft texture. It can be served with tomato gothsu or coconut chutney.

Ashoka Halwa is another exceptional sweet that you can get in Thanjavur. The sweet is deeply tethered with several festivals such as wedding, christening and several other local festivals in Thanjavur.

Paanagam is an exotic drink that you can devour as much as you like to quench your thirst. Because of the drink’s cooling effects, the best time to have the drink in the summer.

Another drink to savour is Vasantha Neer that is made from mixing coconut water and mint. With a wide range of Dosas, Idlies and other Vada items, the long list of vegetarian food items goes on and on.

Due to the presence of long coasts, a wide range of seafood items is available in Thanjavur. From fish to crab and exotic lobsters, Thanjavur will never disappoint anyone who loves non-vegetarian foods. The availability of numerous hotels and restaurants providing exceptional non-vegetarian food can make everyone wanting for more.

There are also several sweet delicacies in Thanjavur such as Pal Payasam, Sooji Appam, Surul Poli and Kozhakottai that can leave everyone’s mouth watering for more.

People who love tasting new cuisines and going on exciting gastronomical adventures, Thanjavur is a great place to be and experience the magical local food in all its exotic wonder and tastes.