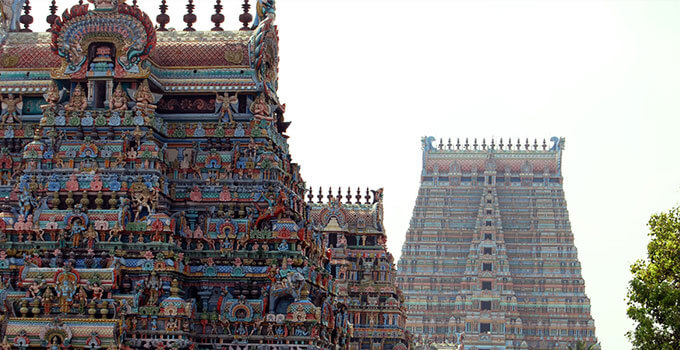 Srirangam is an enchanting little island town formed by the Kaveri river as it splits into two – the Kaveri and the Kollidam. The spellbinding river island formed in-between is about 32km in length and 2.4km in width. It is a part of the famous Tiruchirapalli (popularly known as Trichy) city in the state of Tamil Nadu of southern India.

The island is bound by the Grand Anicut dam (also known as the Kallanai dam) which was built in the 2nd century AD, on the eastern side and by the relatively newer and smaller Upper Anicut dam on the western side. The Grand Anicut is a popular tourist spot with many people wanting to witness the world’s second oldest working dam here in Trichy.

Srirangam town is located in the centre of the island and is a flourishing Hindu Vaishnav pilgrimage centre and has a flourishing economy of its own. This is by virtue of the number of devotees visiting this famous island town from all over the world to worship at the ancient Sri Ranganathaswamy temple located here. The famous Vaikunta Ekadasi temple festival here draws people in their thousands to this little island every year and is a major revenue earner.

The Sri Ranganathaswamy temple is believed to be the world’s largest functioning temple in the world, covering an area of 67, 90,000 sqft and with a built-in perimeter of 4km! The temple is enclosed within 7 ‘Prakaras’ and devotees make it a point to walk through all of them. There are 22 towers in the temple, each with its own unique carving of ethereal sculptures. Of these towers, the Raja Gopuram is the tallest, standing at 72m, making it the tallest temple tower in Asia.

Srirangam has the honour of not only housing the first of the eight shrines of Vishnu, but also the main shrine of the 108 temples dedicated to Lord Vishnu. Being built over 156 acres, this ancient structure is huge and the enclosures consist of enormous, thick walls that run in concentric circles around the inner sanctum. The entire structure is truly an architectural marvel aside from being a work of breathtaking art and a place of historical and religious significance.

The entire city of Trichy and its surroundings is inundated with temples, making it a true temple city. No wonder Srirangam is considered an important place by the Hindus. Getting here is easy too as there is excellent, road, rail as well as airport connection within the city itself.