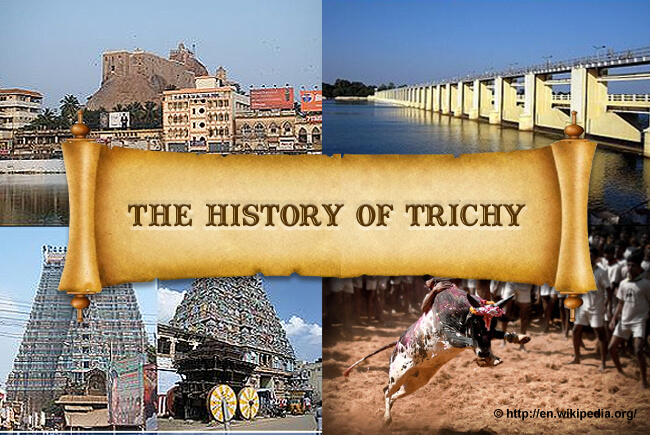 What connects Sir Winston Churchill, Sherlock Homes and our Trichy? It is the humble Trichinopoly Cigar – a mild and fragrant tobacco that was liked by the erstwhile Prime Minister and was mentioned in one of Sir Arthur Conan Doyle’s book – A Study in Scarlet. In fact, this has been the city’s main export since the time of Queen Victoria!

But, there’s more to Trichy or Tiruchirapalli that tobacco and cigars. It is believed to be one of the oldest inhabited cities of Dravidian culture. Archeological evidence show that it was ruled by the Cholas as far back as 300 BC. It was also ruled by the Pallavas and much later by the Naickers. It finds a mention in the travelogues of the Greek historian Ptolemy.

Uraiyur or Woraiyur was known as the capital of the Cholas who ruled here until 3rd Century AD. They built the Grand Anicut across the Kaveri River in 2nd century AD. This anicut or dam is the oldest surviving dam in the world and was built by Karikala Cholar. But Trichy is also home to a structure that dates back to pre-historic times. Archeologists have determined the age of the Rock at Rockfort temple to be over 3,800 million years.

After the decline of Cholas, Trichy was taken over by the Pallavas who reigned until AD 880. Later the Hoysalas ruled Trichy until the Pandyas came, and the Pandyas ruled it until it was captured by the Mughals. The Nayaks of the Vijayanagara Kingdom later took over from the Mughals until it became part of the territories of the British. Every ruler left an indelible imprint on the city and created something unique that is now part of the great Dravidian architecture.

For instance, the Nayaks built the Fort surrounding the Rockfort Temple. They also built the Ucchi Pillaiyar Kovil and the Teppakulam. The Pallavas built many cave temples within the Rockfort. The Srirangam Temple is said to be initially built by the Cholas. It was later renovated by the Nayaks, Pandyas and the Hoysalas who also carried out extension work. The Lady of Lourdes in Trichy was built in around 1840 under the French rule and is said to be an exact replica of the Basilica of Lourdes in France. Besides the church, there are several other schools, colleges and churches built during the British and French rule.

The history of Trichy may be as old as history itself, but its present too is worth commending. It is now an industrial hub with several government managed companies like HAPP, OFT and the BHEL functioning from here.