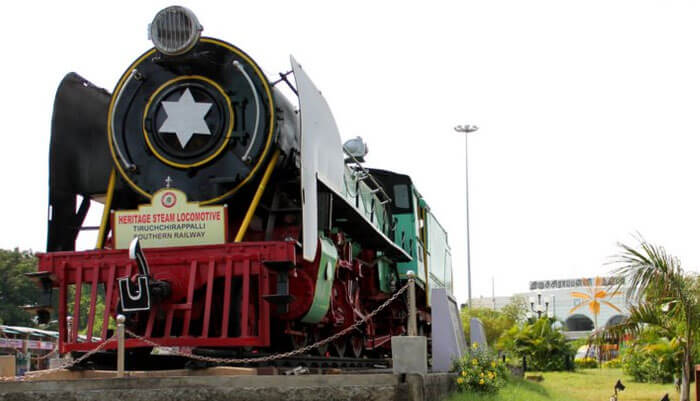 Unlike many other museums that you might have visited in the past, the Railway Museum at Trichy offers an exceptional feel of unlimited adventure. With your loved ones, you can enjoy the rich confluence of railway history and affluent heritage of the city of Trichy.

It was on the 30th June of 2011, when the foundation stone for the museum building has been laid. The first phase of the construction was completed quickly and was inaugurated on the 18th of February, 2014. Though the museum was inaugurated, due to the lack of required infrastructure and facilities, it was not opened for the public.

It was in 2015, that the museum was completely constructed and dedicated to the public. Ever since the inauguration of the museum, it has become one of the most celebrated attractions in Trichy, not just for the en-route travellers but also for the travellers who come from afar.

Indoor exhibits in the museum are the highlight of the museum. There is a wide range of artefacts numbering up to 400, and there are 200 images kept in the gallery to provide an account of the journey of the South Indian Railway through time.

Most of the items on display in the museum are able to educate the visitors with the history of Indian Railway, how it used to run and the growth curve of the same to become one of the largest railway systems and employers in the whole world.

The outdoor exhibits are created to help the visitors to understand the engines that were used by the railways years ago. There are an MG ‘Inspection Carriage’ RA 9192 and an older ‘Fire-Engine’ vehicle displayed at the premises of the museum.

This is a golden opportunity for people who are interested to touch and feel the gigantic machines that used to carry people and goods across the length and breadth of the nation decades ago. It can definitely take the visitors decades back in time for sure.

The Railway Museum at Trichy has become one of the most prominent and important tourist spots in Trichy quicker than anyone would have imagined. Spanning across 15 acres of land, the museum has every potential to grow as an exceptional attraction in Trichy, for sure.