The Importance of Karthikeyan or Murugan in Tamil Literature and Culture 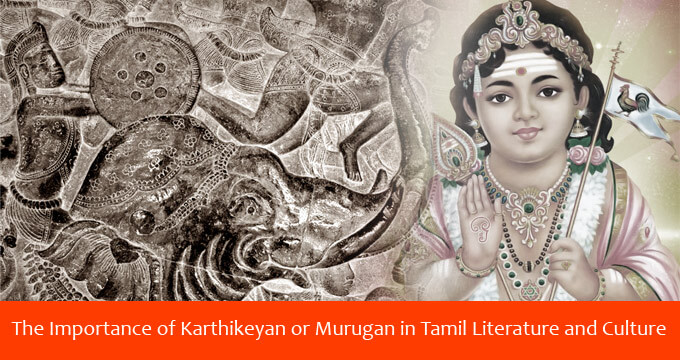 Lord Murugan or Karthikeyan is an extremely popular God in Tamil Nadu. He is worshipped with great fervour throughout the state and also in some parts of Kerala and Malaysia. It sometimes makes people wonder why this particular God is held on a pedestal among the other Gods in Hinduism. The answer to this can be found if we take a quick glance at the literature, archaeological remains and popular legends prevalent in Tamil Nadu.

The word Murugu literally means divine, youthful, fragrant etc. Since, the God is considered to be a manifestation of handsomeness and masculinity, he was aptly named Murugan. There is also another reason why he is named Muruga or Muruka. Mu stands for Mukundan or Vishnu, Ru stands for Rudra or Shiva and Ka stands for Kamalan or Brahma. So, his name is symbolic of the three major forces of nature according to Tamil mythology. Another name of Muruga is Shanmukha which means having six faces. The faces symbolize the five senses and the mind working in harmony.

The earliest account of Murugan is perhaps from the Tamil Sangam literature, which dates back to 300 BC. A deity named Murugu or nature spirit is described to be worshipped with ritualistic sacrifices. Further, there are mentions about a priest with the name Velan who is associated with this deity. It is a name that later got ascribed to the deity himself. The process of worship of the deity also included a form of dance called Veriyaattu, which is still practised.

The Pandya Kings contributed to the development of Tamil language by creating many Sangams or groups. Lord Muruga is said to have presided over the second Sangam called Idai Sangam when the capital of the kingdom was shifted to Kabaadapuram in Kanyakumari. A work in Sangam Literature known as Tolkappiyam glorifies Murugan as the young and resplendent red god who is seated on a peacock. It is further mentioned that Murugan is the favourite God of the Tamils. This could be proof that the God was popular in the culture of Tamil Nadu much before his mention in literature.

The best literary works according to scholars on Murugan are the Thirumurukattruppadai and Paripaatal. They have poems exclusively written in praise of Chevvel or The Red One. As mentioned before, this is believed to be a description of Lord Murugan. Tamil Nadu was divided by the writers of the era into five allegorical areas or tinai and poets believed that the presiding deity of the Kurinci region was Murugan. Other works of the Sangam era that mention Murugan include Akananuru, Paripaatal and Purananuru.

Archaeological findings of pottery from various areas of Tamil Nadu have shown ideographic inscriptions of a brave warrior who is capable of killing demons as early as 3rd century BC. The notable aspect of this is that the iron representation of the Vel and rooster have been found in the ancient graves of Aticcanallur – an extensive prehistoric burial place in Tamil Nadu that is roughly 7,000 years old.

The weapon of Vel in the hand of Karthikeyan is also a deity in itself and is considered to be the tool that will wipe out ignorance. Culturally the peacock is the vehicle of Subramanya. The bird is known for its unpredictable behaviour and symbolizes ego, which often leads to erratic behaviour. The depiction of Lord Muruga travelling on the peacock signifies the purging of one’s ego. Worship of Karthikeyan as the son of Lord Shiva was a practice of the formal religious sect called Koumaram, sanctified by Sri Shankaracharya. His Shanmata system also propagated this idea.

The origin of Tamil language is associated with the legend of Sage Agathiyar who lived in the area that is now modern day Gujarat thousands of years prior to the start of Kali Yuga. A great scholar of his time, he was well educated in various fields. During his travels in India and abroad, he met Lord Murugan in the form of Sage Kandan in present day Trincomali. According to the legend, it is Lord Murugan who instructed Sage Agathiyar to create the Tamil language. He was assisted in the task by Sage Bhogar from China, Thaeraiyar from Malaya, Yugimuni from Kerala and Pulipani from Kantha Malai. 53 years later, Lord Murugan inaugurated an institution called the Sidhar Gnana Koodam to promote development and research of the language.

It is very evident that Lord Murugan or Karthikeyan is a deity closely connected to the Tamil language and thereby the cultural heritage of the Tamil people. Perhaps one of the major reasons for his importance is that, unlike many of the other Hindu Gods, he is believed to have been instrumental in the development of the language and culture by directly being involved in the process. The evidence for this, as we have seen, is present in literature, archaeology and mythology, which all point towards the influence of the deity in the cultural evolution of the state