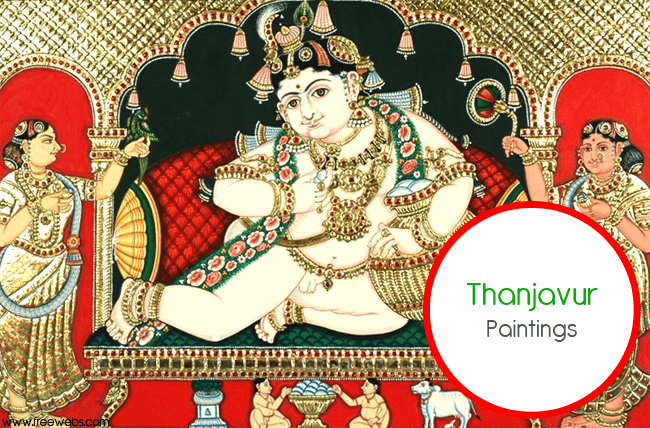 The art and architecture of a place can never be alienated from the cultural, social and political impact of the place from which the architecture/art form belongs. Thanjavur or Tanjore was the heart of Tamil culture. The history and civilization of this place dates back to the Cholas. It was also an important principality of the Vijayanagara empire. People from far and wide came to Tanjore to showcase their talent. Among the other influences include the Marathas, who besides bringing their own culture and tastes with them.

It is during their reign in the 17th to 18th century that the Thanjavur style of painting came into existence. Paintings in this style are mainly of divine gods and goddesses, painted on a cloth canvas or on wooden tablets and them embellished with thin gold/silver leafs and semi precious stones. It is these embellishments that make the paintings unique. These are used to decorate the clothes of the subject. The subject of the paintings do not vary vastly- it is either Lord Krishna in his bala (child) avatar playing one of his many pranks, or Lord Rama during his coronation, or the Goddess Saraswathi.

In the past, artists were selective in their use of color. This was because they used natural dyes obtained from vegetables and fruits, but today thanks to the availability of chemical colors, the palette isn’t as restricted as it was before. But there are a few colors that are retained for their symbolic value. For instance, outlines are sketched in brown, red is preferred for the background (using this color makes the style unique). Lord Vishnu and his avatars (Krishna, Rama, etc.) are depicted in blue, goddesses are painted yellow. The color black is used sparingly. Another unique aspect of these paintings is the shape of the figures; almost all of them are round bodied with almond eyes. The women are shown to be big bosomed.

Earlier, the Tanjore style was restricted to the Raju community in Tanjore and the Naidu community in Madurai. These artisans considered their art to be sacred and limited the scope for the subject. As earlier said, Tanjore was a part of the Vijayanagara Empire and their influence can be largely found in these paintings- they are therefore considered to be a part of the Karnatak art. Today, however, the art form isn’t restricted to a single community, but is open to all those who’d like to learn it. In fact, the Tamil Nadu Handicrafts Development Corporation regularly organizes short term courses in and around Trichy to introduce the style of Thanjavur paintings and ensure that the heritage art does not die.