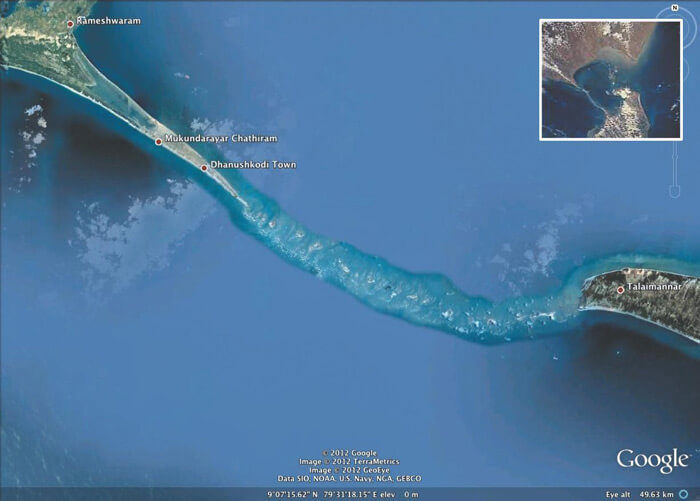 Ramayana is an epic that has influenced Hinduism extensively. Apart from its religious importance, it is also revered world over as an anthropological narration and a riveting ancient travelogue across India and Sri Lanka. The great journey’s last leg goes through Tamil Nadu, giving this ancient state a unique stature in the Indian Ramayana Trail.

One of the most common aspects that connects Ramayana and Tamil Nadu or Tamilakam, would be Rameshwaram, the point from which the legendary bridge was constructed, connecting India to Lanka (now Sri Lanka). There are several other local legends and quaint places in Tamil Nadu that are related to the ancient lore of Ramayana.

Modern day Trichy, or Tricullapalli or Trishirapalli, as it used to be known as, used to be the kingdom of Ravana’s brother Trishira. On the banks of the Kaveri River, stands a beautiful Shiva Temple, which is said to destroy past sins. According to popular legend, Lord Rama had prayed to Lord Shiva here in order to free himself of the sin of slaying Khar and Dooshan.

Rampant, Kodikkarai, Vedaranyam: Along with his entire army, Lord Rama had proceeded towards the Southern direction from this town. It is said that he first viewed the sea from Rampant. There are monuments in the forest dedicated to the ‘footprints’ of Lord Rama.

Srirangam, for instance, enshrines Lord Vishnu idol that was worshipped by Rama. Legend has it that Rama presented it to Vibhishana, Ravana’s successor in Sri Lanka . The Ucchhi Pillaiyaar temple, Srirangam is also associated with a land lore that suggests an encounter between Ganesha and Vibhishana. The temple city is very close to Sangam hotels, Trichy Near the capital city of Chennai is Eri Kaatta Ramar (Kodandarama) temple at Madhurantakam (Chingleput), a temple town that celebrates Deepavali as Rama’s return from Lanka, a notion quite different to the usual norm.

The Thiru Usaattaanam, Ramanadeeswaram Shiva temples and the Tirukkannapuram Divya Desam are associated with legends related to Rama’s return to Ayodhya from Lanka.

One of the hills in Nagercoil district is known as ‘Marutua mala’. According to native belief, the hill was formed due to the chipping off from the Sanjeevani Mountain as Lord Hanuman carried it on his shoulders on his way to Lanka. The geology of this hill still baffles many experts.

Rameshwaram: Of all the sites that owe its name to Ramayana, Rameshwaram is perhaps the best known of all. It possesses one of the twelve Jyotirlings in India. The grand Ramanatha Swamy temple at Rameshwaram is believed to be the site where Rama offered prayers to Shiva while returning from Sri Lanka. Other prominent temples in this region are the Tiruppullaani Aadi Jagannatha Perumaal temple (believed to be the site where Rama rested before his journey to Lanka) and Kadaladaitta Perumaal temple at Devipatnam on the Sethu coast (that houses the Navagrahas said to be installed by Lord Rama).

Follow the Ramayana trail and enjoy the hospitality at the Sangam Hotels in Tamil Nadu. Our four hotels in Madurai,Thanjavur, Chidambaram and Trichy are close to all these pilgrimage spots, situated just a short drive away.