Pongal – A traditional festival of Trichy 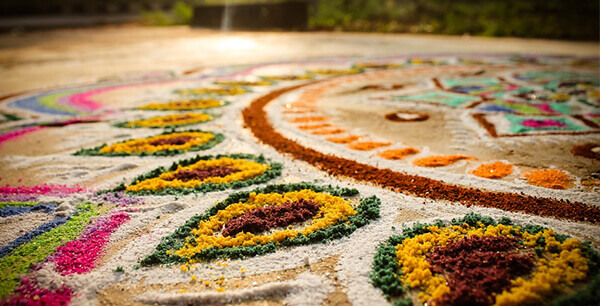 Trichy, also known as Tiruchirappalli, a historically rich region of Tamil Nadu, celebrates a number of festivals, most of which are based on Hindu concepts and mythology. The most important festival in this culturally-rich city is the ‘Pongal’. For as long as people have been involved in farming, there has been some form of harvest festival; for Pongal, it’s a four day-long festival that’s celebrated with a lot of colorful fanfare in the month of January. The Sun God, Mother Earth as well as cattle are worshipped.

This festival is celebrated from 13nth January till the 16nth. Also known as Thai Pongal, the festival dates correspond with the last day of the Tamil month of Maarghazi and to the third day of the Tamil month of Thai. The festival corresponds to the winter harvest festival ‘Makarsankranti’ which is celebrated through the rest of India. This day marks the first day of the sun’s six-month long journey northwards towards the equinox and the beginning of the gradual warming process of the earth. The origin of this festival is believed to be about a 1000 years ago during the rule of the medieval Chola Empire.

The word ‘Thai’ refers to the tenth month of the Tamil year while ‘Pongal’ refers to overflow or ‘boiling over’. Pongal is also the name of a rice, lentils and milk dish that is ritually prepared on this festival day. A popular Tamilian belief is that knotty family issues get sorted out during the month of Thai; the month is also known as the time for weddings. For an agriculture community, harvest represents riches, which are used to sponsor the elaborate wedding ceremonies.

The first day of the festival is for appeasing Lord Indra, the ruler of rain clouds and girls sing and dance around bonfires made of agricultural wastes and useless household items. The second day is when the Pongal dish is prepared outdoors under the sun in decorated earthenware pots and offered to the Sun God. The third day is dedicated to cattle when they are decorated with garlands, beads, bells and sheaves of corn before worshipping them. They are fed with the Pongal and village youths traditionally involve in cattle racing on this day, creating a great atmosphere of fun and revelry. The last day is a little sober and offerings are made by women of Pongal and harvest products served on a turmeric leaf.

A great way to enjoy these festivities would be to book into one of the numerous hotels available and experience the colorful and fun festivities firsthand!